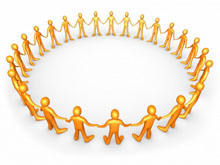 In this article, I’m going to discuss the relevance of social networking to learners of English, some of the developments in learning English as a foreign/second language on-line and how this might shape the future of e-learning and learning management systems for EFL/ESL.

So much to learn, so little time to learn it.

For learners studying English in their own country, it is often difficult or inconvenient for them to get enough exposure to and practice with English. Classroom time with small groups (i.e. twelve learners or less) with a native speaker tutor who can give guidance on what constitutes “authentic” English at schools, colleges, universities and academies in most countries is at a premium and most only provide between two and four hours per week, although in some cases this can be as high as six. In my opinion, between two and four hours of small group classes per week is not adequate for students to learn the language and develop the communication skills they need.

The majority of EFL/ESL coursebooks include workbooks that provide further written grammar, vocabulary, reading and sometimes even listening activities for learners to do outside the classroom in their own time. Also, tutors often encourage or require learners to read, listen to English radio programmes, watch English films and TV shows, keep diaries, etc. These are typically solitary activities that place the emphasis more on passive understanding or grammatical understanding of language than on active production and communication skills.

Using the Internet as a learning resource.

Growing numbers of learners are now taking the initiative for themselves and using Web 2.0 technology to practise their English. As well as passive comprehension practice such as watching videos on YouTube, listening to English language radio stations such as BBC Radio 4 and BBC Learning English.com, reading on-line magazines and news sites, learners now have an assortment of social networking sites to choose from where they can get in touch with other people with similar learning interests to their own. Currently, there is a bit of a “land grab” going on as small start-up companies such as Babbel and Live Mocha create social networking sites especially for EFL/ESL learners. Currently, learners can keep in touch with each other through instant messaging (chat), bulletin boards (forums), VoIP (Internet telephony) and, of course, video conferencing and shared on-line whiteboards.

Quite rightly, EFL/ESL learners just want to “get on with it” with what they already know. Many have already spent a considerable amount of time exploring and learning how to use the software applications on social networking sites for activities such as instant messaging, bulletin boards, VoIP calls and video conferencing. Personally, I don’t think it’s a good idea to insist that learners learn to use yet more, often poorly designed, social networking application interfaces. So why not just let them use the ones they already know?

There’s a wide variety of software and services available and often the most widely used and known ones are free. Google and Yahoo! are popular and particularly good at supporting open protocols and open source (i.e. free and adaptable) software. It’s much cheaper and easier to use 3rd party web services provided by Google, Yahoo!, AIM, MSN Messenger and Skype because they have established networks that have been developed by highly skilled and talented teams of developers over several years.  The really hard work has already been done for us so we get the benefits of reduced development time, huge, stable, well maintained and powerful networks, well documented APIs and public support forums for both developers and users. Having all this available for free has brought the cost of creating and running social networking platforms for e-learning effectively, within the reach of even small schools and academies.

So, allowing learners to stick with their favourite social networking applications and services and integrating these with learning management systems effectively kills two birds with one stone:

#1 – Learners are already well-versed in using the software and so are more likely to engage with their classmates on-line,

#2 – The most costly parts of developing, maintaining and improving the services are expertly taken care of for free.

Keep up or fall behind

I think that in the near future, LMSs will have to incorporate and integrate more 3rd party social networking services or risk becoming irrelevant to EFL/ESL learners as they migrate to social networking sites for their communicative language practice. I’m sure that many learners will welcome the opportunity to link their own personal social networking spaces within LMSs so that they can share their blogs, comments, etc. with their classmates. They’ll also have the added benefits of having all their applications available from a single website, i.e. their school’s learning management system, and developing their English communication skills with topics and ideas that are genuinely relevant to them in a safe environment with people they already know and see in class on a regular basis.