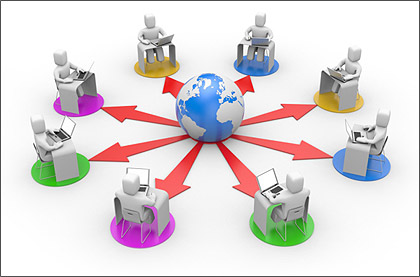 In an attempt to address the issue of the higher student attrition (drop-out) rates in distance education (DE) and elearning than in face-to-face classes, it’s becoming more common for educational organisations to try to evaluate learners’ to find out who are unlikely to succeed on their courses and programmes and may require extra support and guidance. In other words, to assess learners’ preparedness for DE and elearning.

I think one of the biggest issues with self-assessment of readiness to study online is that learners often don’t know what the questions and ratings scales they’re presented with on questionnaires and application forms mean. Additionally, according to the Dunning-Kruger effect (Kruger & Dunning, 1999), learners with lower knowledge, skills, abilities, and experience tend to rate themselves proportionately higher than more experienced and proficient ones. In other words, the less they know, the less they know what they don’t know and the poorer they are at judging their own proficiency. In more exaggerated cases, we may actually be turning away more suitable learners and accepting less prepared ones.

In my attempt to address this issue, here are some qualitative questions that I feel are more likely to elicit responses that reflect a learner’s knowledge, skills, and abilities (KSAs), as well as their experiences, beliefs, attitudes, and values, that are relevant to distance education (DE) and elearning and to identify areas of strength and weakness rather than simple binary “yes or no”, or ratings scale responses. In other words, to encourage learners to describe their preparedness and have the interviewer decide how they compare to the minimum necessary KSAs defined in our learning organisation’s policies. It would also be possible to provide learners, whose KSAs may currently be insufficient or borderline, with personalised plans of action that they can use as a guide to “bring themselves up to speed” for successful DE and elearning.

Technical IT and Practical Requirements

What levels of technical and IT KSAs, practical facilities, and experience, beliefs, and attitudes, which are necessary for successful participation in DE and elearning, does the learner have?

Although more time consuming and labour intensive to conduct and administer, I think these more descriptive, open ended questions should be more helpful in allowing organisations to assess learners’ preparedness for participating in DE and learning courses and programmes effectively. Also, they can be adapted and made more specific so that they more accurately reflect the requirements of specific courses and programmes.

Ubuntu Linux and other distributions like Edubuntu, Kubuntu, Lubuntu, and Xubuntu have come in leaps and bounds in recent years and are becoming more fully featured and easier to use. I think they are now getting to the stage where they are potential replacements for Microsoft’s Windows and Apple’s OS X for elearning. Well, almost…

Elearning increasingly includes live multi-way video web conferencing, which on Ubuntu Linux can be problematic. Most web conferencing platforms and systems require either Adobe Flash Player or Java Runtime Environment (JRE) to be installed. If you use the standard Firefox web browser, you need to install Flash Player as an extra, since it isn’t free and open source software (FOSS) and cannot be included in FOSS distributions. Luckily, it’s easy enough to do via Ubuntu’s software centre. It’s a similar process to installing apps on a smartphone or tablet but faster and easier.

There are other areas where Flash Player can be useful. For example, Ubuntu Linux doesn’t have support for the H.264 video CODEC. H.264 is used all over the web, including Youtube*, Vimeo, and Google Hangouts. Adobe Flash Player is an easy workaround to allow you to access and view those services. Also, the SWF Activity Module, Online Audio Recording, Soundcloud, WizIQ, LiveStreaming, and many more plugins for Moodle, as well as Moodle’s default media player, all use Flash.

* Youtube will play video without Flash or H.264 as HTML5 but only low-resolution versions intended for some mobile phones and not all videos are available in this format.

How to install Flash Player in Chrome, Chromium, and Opera

However, installing Adobe Flash Player doesn’t make it available to all web browsers on your operating system (Even on Windows, you need to install one Flash player for Internet Explorer and then one for other browsers). If you want to install Flash Player for other web browsers in Ubuntu, e.g. Google Chrome, Google Chromium (the FOSS version of Google Chrome) or in Opera, it’s a bit more complicated. This means using the Terminal (Ubuntu’s command line; press “Ctrl + Alt + t” to open it) and carefully typing in the following commands. After the first command, Ubuntu will prompt you for your admin password, which is usually the same password you use to log in with (if you’re the computer owner):

How to install Java Runtime Environment

Some video web conferencing services and systems require Java Runtime Environment (JRE) to run on your computer. Most notably, Blackboard Collaborate, formerly known as Elluminate Live, requires JRE but even with it and the Iced-Tea browser plugin installed, it can have issues with connecting the audio. This is a frustrating issue that I haven’t found a workaround for yet. Please let me know if you know of one!

You can install JRE and the browser plugin from the Ubuntu Software centre. Look for the OpenJDK Java 7 Runtime and the Icedtea Java Browser plugin and install them both. If you’re feeling more confident with using the Ubuntu Terminal (Ctrl + Alt + t), it’s quicker and easier to install them like this and it will make sure that your computer uses the latest installed version of JRE by default:

So it looks like Ubuntu Linux is almost there… but not quite yet. Support for multi-way video web conferencing is there and is possible but not complete, especially in the case of Blackboard Collaborate. It’s also sometimes necessary to install additional software in ways that most “normal” users may find confusing and/or discouraging to do themselves on their own computers. Additionally, many learners and teachers may not know why their web conferencing platform doesn’t work or know that it can be fixed by installing the correct software. Let’s hope things improve further in the coming months or years.

The following is a quick, simple “How to… ” guide for setting up instant, free, “no frills”, easy to use, multi-way video conferencing and chat in Moodle for up to 8 people at a time. It also works on any web page as you see in the embedded room at the bottom of this article.

How to embed whereby.com in Moodle

There are also options to claim a room as your own and lock it so that only users with the correct password can access it. If you lock a room with password protection, you can simply put the password at the top of the Moodle page where you’ve embedded the whereby.com room.

If you want to record conferencing sessions, you can use one of the many screen recording applications that are available. A good free and open source one for Linux systems is Record My Desktop. Here’s a list of screen recording software for other operating systems.

“whereby.com is a web based video conversation service that allows you to have video conversations with others in the browser simply by having individual participants typing in the same URL in the browser window. Typing in the same URL will make the participants appear in the same room where you can talk to each other with voice and text chat and see each other with transmitted video. You do not have to install any software or plugins to use whereby.com. You also do not have to register or log in to use the service.

Video and sound communicated in whereby.com, is only seen by the people who are present in a room at the time the content is communicated. It is not disclosed to anyone who are not present in a room. You should be aware that by default a room is open, so anyone who knows the url can enter the room simply by typing the URL in the browser. If anyone enters a room you are present in, you can see them in the room. You can prevent others from entering a room by locking the room. When a room is locked, only room owners can enter a room.

You can claim a room as your own room. This will give you control over the room, and give you the ability to customize it for your own communication needs. When you claim a room, you enter your email address. You will then get an email containing a link that provides access to the owner privileges for the room. Room owners can customize a room e.g. by setting the background image in the room and by using other customisation options that is or may be provided in the service in the future. Only room owners can set the lock for rooms that have been claimed and the lock will be retained when everyone has left the room so you need the room code to enter back into the room. A crown symbol will be shown on the video feed of a room owner to make it apparent who is the owner.

You can follow a room by clicking the “follow” symbol. Following a room implies that you will be notified whenever someone enters a room you are following, even though you are not currently in the room yourself. You can click the notification to enter the room and have a conversation with those that entered the room.

We retain the right to create limits on use and storage at our sole discretion at any time without prior notice to you.”

I have no affiliation with whereby.com or anyone associated with them. I have written this article based on my own use of the service with learners and it should not be considered as an endorsement. I am not responsible for anyone under any circumstances who decides to use the whereby.com service.