I’ve spent quite some time experimenting with video in Moodle. I’ve been looking for a reliable way to deploy video as an e-learning resource that will work across all platforms: Windows XP, Windows Vista, Mac OSX and Linux. So far, the most widely accepted video format has been Flash Video, otherwise known as FLV. FLV is used by most of the major media companies with a presence on the Internet, including Youtube,  Google, Yahoo!, CNN and the BBC to mention but a few.

I’ve found that Moodle, as it stands (versions 1.8 and 1.9), is not the easiest possible way to deploy FLV video. Furthermore, if you want to add captioning, subtitles, links, etc. it becomes so difficult that you need to call in a developer or somebody who’s pretty well informed about IT, web design and server-side scripting. Even something as simple as displaying an image before the video starts. It’s certainly not for the average teacher or course content developer!

Well, I’ve decided that there has to be an easier way. I’ve developed a new plugin module that deploys FLV video in as user-friendly a way as I can. I used the JW FLV Player because it’s the most powerful and versatile Internet based FLV Player at the moment and only required a small one-off licence fee of €30 to use it on a website. It has too many features to mention in this article but you can get a good idea of what it’s capable of in the FLV Player Activity Module documentation. 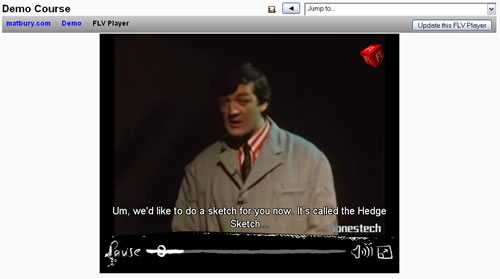 I have a demonstration of the Moodle FLV Player Activity Module installed on my learning management system. The demo course allows guest access so there’s no need to create an account. If you would like editing privileges so that you can see how easy it is to use, please contact me. Alternatively, if you are already a Moodle user with administrator privileges, you can download and install the module for yourself.

I’ve released the FLV Player Activity Module under the GPL open source licence, which means that it’s free and you can change it or add to it in any way you like. If you make any changes to it, please let me know what you’ve done and why. Equally, if there are any changes or adaptations that you’d like to see made, let me know. If it’s something that would benefit the whole community, I’ll most probably include it in the next release.

The FLV Player project is hosted on Google Code with tutorials and sample downloads. It’s entirely free and you can download and install it in your Moodle in a couple of minutes.