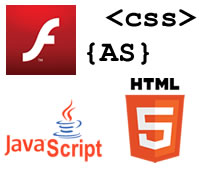 It’s a loaded question, isn’t it? The kind of attention grabbing headline we’ve come to expect from the mainstream media who receive a substantial portion of the $691,000,000 (2010) of Apple Inc.’s annual marketing budget. So what of this epic struggle between Adobe’s flagship software platform and the open source, open standard HTML5?

* By “born” I mean the first working versions of the respective languages and runtimes were released to the public, i.e. HTML 2.0 and Flash Player 2.0.

So none of them are new and they all get significant new features added to them from time to time. HTML, CSS, Javascript and Flash have co-existed, collaborated and integrated with each other for the past 14 or so years. They’ve done very well together and if we took any one of them away, the WWW would be a poorer place for it. They all have their merits:

In short, they’ve all had a long and productive history together and they’ve all contributed to making the web a richer, more enaging, more accessible medium. At one time or another, they’ve all had their critics and predictions of their demise. Will HTML5 kill Flash? More likely, HTML5 will gradually replace HTML4 and some but not all of what Flash currently does. No killers, no victims and not very sensational after all.