In a previous article, I wrote about a new web communication protocol being developed by Google called Google Wave. Well, five months later,  I finally have my Google Wave developer’s preview invitation and I can start creating waves and experimenting with my very own account.

Embedded in this article below is a Wave hosted on wave.google.com. Unfortunately, Google Wave hasn’t gone fully public yet so the only people who can see and interact with the embedded Wave are other developers with preview accounts. For the vast majority of readers of my blog, I’m afraid you’ll have to make do with a snapshot image of how it looked when I first wrote this article. Due to the dynamic and collaborative nature of Waves, this one will change over time as more people make their own contributions. Eventually, when Google Wave goes public, you’ll be able to see it, interact with it, post your own comments, add images and files, gadgets, etc.

There’s a buzz in the air

There’s a great atmosphere of buzzy anticipation among the privileged few who have developer preview accounts and the growing community is constantly speculating about how this will shape the future of web communications. I believe that this new protocol, which is open source and available to everyone, will bring about a revolution in on-line communication and collaboration. Google are promoting it as a replacement for email, although I personally doubt that this will be the case. I think it certainly will have a huge impact on social networking. How this will unfold, we can only wait and see.

How will it affect e-learning?

As I wrote in my previous blog post on Google Wave, I think this new protocol is particularly relevant to e-learning and learning management systems. At the moment, having these real-time, on-line, communicative and collaborative tools comes with a hefty price tag and companies such as WebEx (Cisco Systems) and Adobe Connect charge such high prices for their services that only large corporations and organisations with big budgets can afford to use them. Google Wave promises to level the playing field and make high-end web telecommunications as cheap and easy to use as email. Expect to see web conferencing and real-time on-line classrooms at a school, college, academy or university near you soon!

Also, since it’s an open protocol and the software is open source, anyone can create gadgets, plugins and interfaces for it. Propelled by heavy demand, Google are already setting up a marketplace for them as we speak. I expect most of the new applications will be available for free. I can already see learning management system developers scrambling to create plugins that will leverage Waves for e-learning purposes. For learners at least, the future looks bright, the future looks exciting.

More and more developers are getting onto Wave and developing plugins/widgets/gadgets/whatever you want to call them, some of which integrate Waves with other sites such as Facebook, MySpace, etc. These integration plugins are not secure and could expose your web accounts to hackers, spambots, spy-ware and other security threats. Under no circumstances should you use these plugins on the open web. You find your Facebook account, bank account and/or identity belong to a Mafia gang in Nigeria, Russia or China faster than you can say, “How did that happen?” You’ve been warned!

Here’s a static snapshot taken at the time of publishing: 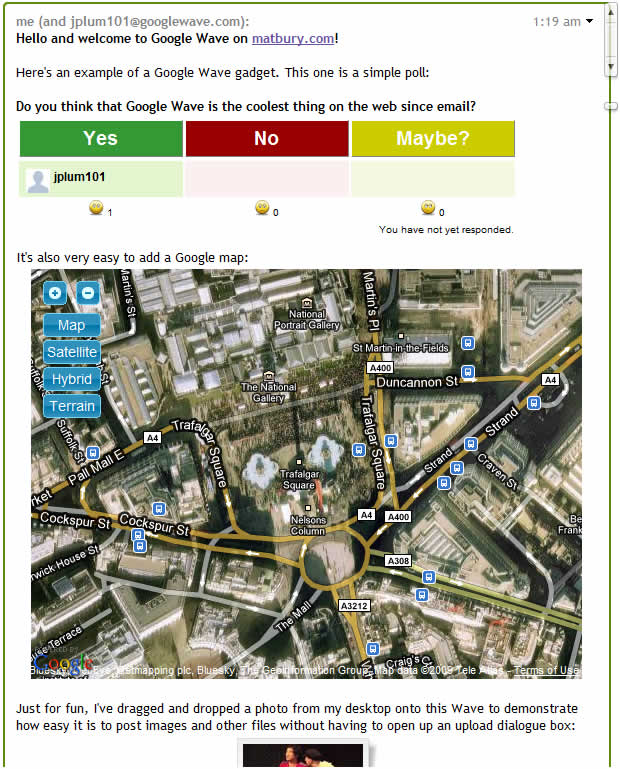 If you have a Google Wave account and you’ve signed in, you should see a live Wave below. You can sign up for a Wave preview account here.

Google have deprecated Wave as a standalone service. It’s now incorporated into Google’s other services such as Docs and G+.